As I've mentioned before, a number of us attended the Ark Encounter grand opening for a protest. There were a number of reasons for the protest - to let visitors know that it is anti-science and not for kids, to inform the general public that their tax dollars went to support it and that the story is not a "feel good" story but one of genocide and incest.

At the protest, we encountered a few "counter protesters", primarily felon Kent Hovind's son, Eric, and his "friends" at Creation Today.  (The relationship matters - Kent Hovind recently spent 10 years in jail for tax evasion - his son simply took over and kept up the anti-science agenda.)

Eric Hovind, it turns out, is dishonest, obnoxious and rude - what a perfect example of a "true" Christian.  The method of debate by Eric (his friends didn't do much - obviously far less willing to appear to be complete dicks and not prepared to debate/discuss with people who actually know that Eric and his crew are full of shit) is to never allow an argument to be followed.  Eric would constantly change the subject, ask another unrelated question or, even, imply that you beat your wife (seriously!) to completely throw you off.

Enough about that - the point of this entry is to share the brochure that he handed out to a number of us protesters.  To say I was surprised when I read it would be a complete understatement.

It was a tri-fold brochure so I'm breaking it up by page for now (the full image is below as well).

The first page is silly enough - the bigger comments are, supposedly, points that the thinkers among us are making.  The smaller print is something, I suspect, that we claim but often forget when we're (not even) making the points in larger print.

First of all, none of us claimed that Noah was stupid.  It'd take a pretty smart person to, at 500+ years old, build an ark (that would look nothing like the ark they built in Kentucky) given that even with cranes, cement and other modern building materials, Ken Ham and his crew of many dozens couldn't build one. Noah probably never existed but, even if he did, we know the global flood never happened.

The corresponding small print suggests that those who accept evolution believe our brains came about by accident. (Wow - I think Eric is a liar and actually knows that evolution has never ever been honestly taught like that.)

Eric's god does command execution and has killed a lot of people.  In this story (yes, it's a story), however, we're not suggesting that god commanded genocide, she committed it.  It was supposedly god who brought about the rain and flooded the earth (for how long? You pick - 40 days, 150 days, 253 days?).  His small print is another misrepresentation of evolution - "survival of the fittest" means not what he suggests it does.

The "Your god commands incest!" is another one we don't claim - it is just, logically, what is required to repopulate the earth.  We don't think she commanded incest, we just think that she was okay with some pretty kinky stuff.  (The other biblical incest stories are a Lot better when they leave less to the imagination - no pun intended.)  Eric then tries to use a different definition of "related" (as you'll see inside) as he refers to our common ancestry with other primates.

The final bubble is one that I can't ever seem to wrap my head around - the concept that we can't know what is right or wrong unless we believe in the Christian god or accept the bible.  There are innumerable other cultures in the world that have never seen/heard of the bible and, yet, they've come to similar understandings of mutual respect and co-operation.  That Christians can have morality and know right from wrong is proof that it doesn't require the bible - the stories in the bible demonstrate no where near the level of morality of society today.

On to page 2.  Eric simply explains why he's given us this brochure.

On this page, Eric basically makes our point for us.  His god commits genocide.  The funny part is that Eric equates us making signs and protesting with his god killing all but 8 people on earth.  He then follows up with, and you don't think my god is loving?  Just wait, he/she's got more love coming our way - this time it's "everyone dies by fire" instead of simply drowning.

This page calls for another face-palm.  Let's break it down: Evolution involves incest so nah nah. Tu quoque much, Eric?  What a childish argument especially given that evolution's definition of "related" is not the definition that we use when we speak of incest.  I have a feeling that Eric might have an interest in fucking a few other species and he's hoping for us to give him the "okay".

Eric returns to the "right and wrong" argument - maybe he is sold on this being a great argument but it's paper thin and rather dumb.

Oh, then it gets even better.  "God saved people through something made of wood, and began a new family" -- this reminds me of the opening sequence in Team America World Police.  (If you haven't seen it, you reary reary need to.)  When Team America (god, in Eric's story) shows up to deal with the terrorists (evil people - and by evil, we mean people who didn't worship god enough because that's all god gives a shit about) and save Paris (humanity, in Eric's story), Team America (all loving god, remember?) nearly destroys the whole city of Paris and, at the end, almost completely oblivious to their near complete destruction of the city (humanity, remember?), congratulates itself for saving almost none of it.

For point #3, Eric wanted to address an old version of the graphic created for the "Genocide and Incest Park" that referenced "2000 years".  The graphic has since been changed (something Eric must be okay with given his blind acceptance of a book that's been changed/re-written/plagiarized for hundreds of years) and the 2000 year reference is gone.  However, give Eric credit for not taking away the opportunity for us to further laugh at him.  He states, "Actually the Story of Noah was written in the Torah, in the book of Genesis, by the hand of Moses, about 3500 years ago."  ha ha ha ha ha ha.  No honest bible scholar would even pretend that Moses existed, let alone claim that he wrote any of the bible.

The final point on this page is an outright fabrication. We know that civilizations existed 12,000 years ago and human writing has been discovered that is more than 5000 years old.  Eric either is completely willfully ignorant or is a flat-out liar.  My money is on the latter. 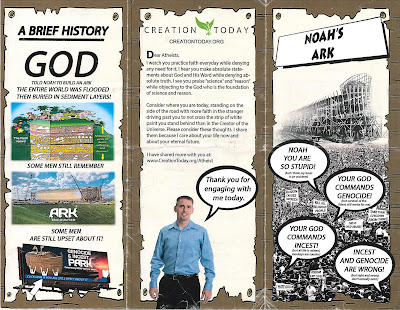 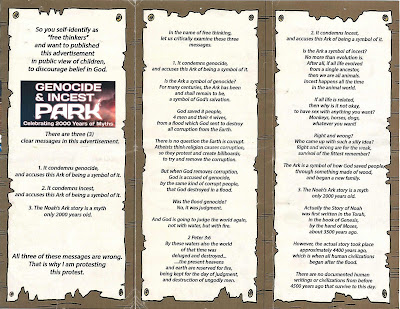 Posted by sarniaskeptic at 9:48 PM

You tell your child to go and rake the leaves for the elderly neighbour with the offer that you’ll pay your child $20 to do it.

You tell your child to go and rake the leaves for the elderly neighbour with the warning that if they don’t, you’ll spank them (or ground them, if you wish).

You tell your child to go and rake the leaves for the elderly neighbour with the suggestion “because that would be a nice thing to do”.

In which of these scenarios do we think we’ve built the most character and instilled the best values in the child?  As a loving parent, which of those approaches would you rather be successful with your child?

Yet, when people of faith often engage in “debates” with atheists, they’ll often suggest that atheists have no moral basis or are immoral or even ask questions like “then why don’t you just rape and steal” (yes, literally that phrase or one close to it).

That atheists clearly do great things and because atheists believe in no sky-daddy punishment or reward, the only other possibility is that atheists do good for the sake of doing good.  Atheists, it must be argued, are the moral ones and, as we continue to demonstrate the case, we must retake the claim to the moral high ground.


(And because people will want to say “What about Stalin or Pol Pot?”, let me quickly address it – being an atheist and doing something because of atheism is not the same thing.  Being a Christian and doing things because you believe the Christian faith demands it of you are also different.  It is important to remember that atheism has no doctrine and is not a belief in something – it is exactly the opposite of belief.)

Posted by sarniaskeptic at 11:20 PM