Let me first make it clear that Robbie Thomas is not a psychic. And, as for psychics providing false information and then using people for personal gain (like Robbie does), Penn (from their first episode of Bullshit! about psychics) says it well:

We have nothing but empathy for the people who are experiencing the loss and grief of the death of a loved one. That guy who lost his mom rips my heart out. I'm a momma's boy whose mom died a couple of years ago, and I'll never get over it, and my dad died at around the same time, and I was very close to both of them. I loved them so much there isn't a moment that goes by that I don't miss them. Houdini didn't really go nuts busting these mediums until he lost his mom. Once you've felt that pure grief, seeing it exploited can take away your sense of humor. Once a loved one has died, all we have is our memories of them. There is nothing more precious to me than my memories of my mom and dad. We don't give a rat's ass about the money these bastards are taking from the grief stricken; what we do care about deeply is the desecration of memories. These "performance artists" are in a very real sense mother-f*****s. That poor guy's grieving memories of his mother are now all f****d up by somebody else's images. All he will ever have left of his mom are memories, and this pig has pissed on those for a buck and a little un-earned fame. I'm sure these lame f***s tell themselves that they're easing the grief, but skits for money can not replace loving memories. How low do you have to be to exploit someone's true grief to sell some bullshit book?

On the following page, http://www.robbiethomas.net/ceasar_cano.php, it states:
"Robbie Thomas is bitter also that psychics are still looked at as entertainment or freaks with crystal balls and says he desperately wants to see that mindset change in our culture."

With that, I think Robbie Thomas is willfully misleading the public and possibly committing crimes - as his fine print says clearly that what he does is for entertainment only. He's either a liar or he's a cheat. (Okay, likely both.)

The page also details Robbie Thomas' "success" in the Cezar/Cecil/Cesar Cano case. And, boy, was it ever a success. I don't know how they didn't catch the murderer instantly - this stuff will amaze you. This is, possibly, the case that Robbie claims as his greatest "success".

Cecil/Cezar Cano Case
Here is the drawing that Robbie Thomas claims are his "psychic Impressions as he received them in the Cano case. Remember, what is shown to Robbie was most likely through the prespective of a 4 year old." 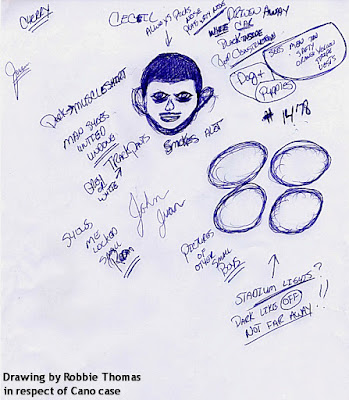 From this drawing that he claims was submitted to police, any intelligent person could have captured the murderer within minutes. Let me walk you through it: 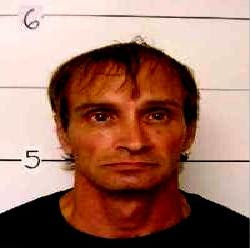 I would suggest that the drawing looks more like, well, any non-descript person with two ears, two eyes, a nose, a mouth and a moustache - which matches the murderer to a "T" - with the exception of the only thing that might differentiate the average person - no moustache. The only thing that Robbie could have got wrong with his sketch and he did get it wrong. Mind you, the "full" head of hair that he sketched doesn't resemble that of Cecil New (the murderer).
Next, it says "driven away" and "white car" and "black inside" because Cecil/Cezar was taken, by his abductor, away in a white car. Though that information was very broad and non-specific it could have been a little bit helpful if it were true - which it wasn't. Wait, it gets better. You'd be able to identify the murderer easily enough with this information.
Next is written "sees men in safty (sic) orange yellow stripe vests" - which explains why, where Cecil/Cezar was found was at a construction site (what? he wasn't?). With that information you'd only have to check every construction site in the area - which, in Kentucky, it was construction season at the time. Either way, that'd narrow down your search locations - except that there was no construction happening nearby (if you'll accept "a couple streets away" as "near") then everyone is always "near" construction.
'#1478' - This is a perfect hit - Except nobody was able to retrofit it to find out what it matched exactly. This doesn't take away from Robbie's abilities, it shows that you and I are failures for not matching it up after the fact. 1 for Robbie.
4 Circles "Stadium lights" "Dark like (off) not far away". Perfect! Spot on! Except it was a couple streets away, they aren't stadium lights that he's talking about but lights in a parking lot. Still, hardly specific enough to locate someone.
Other vague information that Robbie doesn't explain after the fact - let's give it a try, maybe we can help him out: "shows me locked small room" (wrong, unlocked garbage can) "Dark->Muscleshirt" (useless to solve crime, was not in muscleshirt anyway) "Grey or White -> Trackpants" (wrong, jeans) "Smokes alot" (car does? killer? victim? chimney nearby? trucks in the neighbourhood? this is fun!) "always picks nose plays with nose" (me too!) "Cherry" (slushie? tree? cake? pie? pencil crayon? Girl's name? virgin? The matches are endless!) "Juan" (yep, a specific unique name) "John" (again) "Juan" (do "spirits" stutter?) "Pictures of other small boys" (On the wall? In the killer's car? In killer's wallet? Want to take a guess?)
This information could have been retrofitted to match almost any child abduction - the only thing he got right was the child's name (and surely that wasn't because it was provided to him(it was)). After the arrest, when the murderer's name matches the common name for the murdered child, all of a sudden, it's the murderer's name that Robbie wrote down.
Warning: Prepare yourself for the gigglesThe explanation (from Robbie's side) for why the media called him Cecil is, to say the least, absolutely hilarious:
This, in my opinion could be a strong case for spontaneous psychic phenomena borne from the subconcious mind of the article's author. Did the author unconciously write the suspect's name through their own psychic ability? Or, did the author subconciously pick up on Robbie's meditations? Or did both Robbie and the author receive the name from the so-called collective unconscious? It's a strong argument either way one looks at it to support psychic phenomena as real for there is no way for either Robbie or the author of the article to have known the name of the suspect through any normal channels such as media..
It's not simply possible that the media was using Cecil as his common name or a common translation or that they made a mistake and, by coincidence alone, the name matched the murderer. Either way, it didn't help solve the crime. If Robbie was simply playing a game, this would be fun - but he's not. He's lying all the while defrauding and using/abusing the people who he claims to be helping.
Robbie's Claimed AccuracyNow, what does Robbie claim are the matches for this crime? Here they are:
FIRST NAME OF SUSPECTED MURDERER (CECIL)
The first (and many subsequent) news report called the child "Cecil" also. No need for psychic abilities there.
SECOND NAME OF SUSPECTED MURDERER (EUGENE) [UJAN]
Wrong. UJAN is not on the paper (at all) and UJAN is not EUGENE anyway.
STADIUM NAME (PAPA JOHN'S STADIUM) (JOHN / JAUN)
So? Strictly retrofitting. Papa John's Stadium was a couple streets away (Over 1,200 feet away, as the crow flies) and it had nothing to do with the crime.
STADIUM LIGHTS (ALL AROUND NEARBY)
Everything is 'nearby'. Failure. The closest parking lot light (as you can see on Robbie's "maps" that he uses to show how (in)accurate he is) from the Stadium is over 1,300 feet away.
CONSTRUCTION CREW / SITE (NEAR HOME)
So? That is information that anyone could have obtained and it had nothing to do with the case. Robbie does not point out where the construction was (even after the fact).
PREVIOUS BOYS ATTACKED BY SUSPECT
Really? You genius. Many suspects are repeat offenders and, statistically, you were guessing on the "most likely". That's not psychic, that's playing the odds.
It's important to remember, however, that EVERY SINGLE BIT OF INFORMATION THAT ROBBIE CLAIMS "MATCHED", was in HINDSIGHT. None of the information was specific enough to lead to a killer or an area to search.
Why Isn't The "Evidence" From Psychics More Specific?Psychics should be able to complete a form, answering specific questions:
What is the name of the person/people involved: _____
At what address or nearest crossroad are you being held: _____
Is the victim still alive at this time: Y/N Date: _____ Time: _____
They can't, they never have and they never will. Nobody - especially Robbie - is psychic.

As an update, here is a screen capture of the page that WAS on RobbieThomas.net.  I can still be found on the Archive.org: http://web.archive.org/web/20080420134751/http://robbiethomas.net/ceasar_cano.php 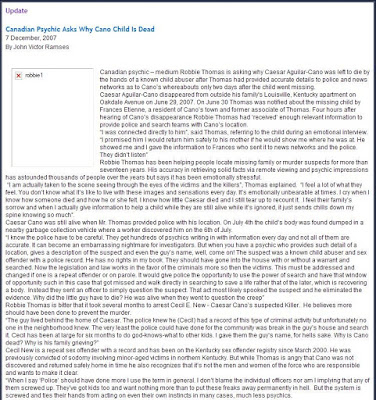 Posted by sarniaskeptic at 9:53 AM

Psychics who use people like this should be ashamed of themselves.

I agree with you that if a child hadn't been killed and this was about another subject it would be laughed at. This is sad though. He probably just distracted the police from doing their jobs.

he is full of shit

Holy shit, that drawing is worse than my three year-old's artistic abilities.

As for the words, they are so vague and pathetic I could have done a much better more accurate job by studying the case. This guy is a failure in every sense of the word.

Awesome analysis! Must look over your other blogs if they are of this quality.

You will love this blog.

sgerbic: This was definitely one of my least favourite entries - I hope you learn from/enjoy some of the other entries.

I couldn't handle the inanity of Robbie's claims with a simple deconstruction. He is being far from truthful when he says he solved this case.

I've been on the skepticblog - it's great to see that others are picking up on the bullshitter aka Robbie Thomas.

DUDE!! Robbie Drew Mohammad! I think we need to call a fatwa against him, or whatever...

Psychics DO exist, please dont tarnish them all with the same brush, Yes there are a Few(in the minority) scamsters out there, But most that i know(friends associates etc) are the genuine article. Please get your facts right before olastering such deflamatory crap all over the World wide Web, it only goes to prove what arseholes you are.