Does the Pope think before he speaks?

The Associated Press has a recent news story about the Pope's feelings regarding the Belgian raids (trying to get information regarding Priestly sexual abuse).  The title of the story was: "Pope deplores Belgian sex raids, stresses autonomy".  The headline was disturbing but I was confident that it was completely taken out of context with the intention of selling papers and not truly what the Pope felt/believed.  I was, as I am so often, wrong.

The Pope actually said the raids were "deplorable".  The word "deplorable" is more rightly applied to the systemic abuse of children at the hands of Priests.  Even more accurate is the application of the word "deplorable" to the cover-up of these acts by the very people who are supposedly the moral authorities.

The Pope is out of touch with reality and not interested in solving the problem - he is now acting as a willing co-conspirator and should be tried for crimes against humanity.

What is the Catholic Church afraid of?
If it has nothing to hide, its goal should now be transparency - to show the world the truth and give people the confidence that they are trying to right their wrongs.  At this point in time they appear to be attempting to save face and protect what is left of the Catholic Church.  I suspect that the Catholic Church's secrets are a little dirtier than we think.

It's time to Sell The Vatican, Feed The World.
Posted by sarniaskeptic at 1:47 PM 4 comments:

The question of evil

When it comes to belief in a perfect creator, one has to inevitably answer the question of "why, then, is there evil?"

That quote, alone, will leave many "believers" with little to say.  We must, however, go a bit further - expand on the claims of the "believer" to show that what they claim to believe is, well, hardly thought out.

Most often it is claimed that evil comes from "free will" - something that is "god given".  Humans have the ability to make their own choices and it is through this that evil is created.  The "necessity" of "free will" is never really explained - why must we have free will if the ultimate consequences appear to be far worse than any potential benefits?

Free will, it is argued, provides the ability for empathy through our own suffering, courage through our own situations of danger/fear and happiness from our own periods of sadness.  The arguments are weak and fail to mention "natural evil" - why does "god" allow (cause?) earthquakes, tornadoes, hurricanes, mudslides, plagues, viruses, disease, cancers (the list goes on)?

We have to remember (at least for the Abrahamic religions) that "god" supposedly had created a "good" world - prior to (let's ignore the misogyny for this posting) Eve eating the forbidden fruit.  We must consider, though, what is promised by this "loving" "god" - heaven.

Heaven is not well defined - when you ask a Christian what heaven is, you are almost certainly not going to receive a standard response.  To each Christian, it seems, heaven has its own meaning.  Some universal claims about heaven include "eternity", "eternal happiness", "joy", "peace", "no sickness", etc.  The bible, itself, refers to peaceful conditions on a new earth and bodily perfection (no hunger, illness, thirst, death, etc.).

If we accept the idea (for the sake of discussion) that heaven is an ideal place - with no suffering and eternal happiness, the question that "believers" would have to answer is "why did god have to create anything less on earth?"  If free will isn't necessary for eternal happiness in heaven, it wasn't necessary on earth.  If humans could live forever in heaven, why couldn't they do so on earth?

(Never mind the question of at what stage in development we'd be in heaven (what age, what shape, etc.) Do people who die at 15 live in heaven as 15 year olds?  If that is the case, wouldn't they all rather die young?  What about a baby who dies shortly after baptism?  Do they live in heaven as babies?  If not, how would anyone recognize them?)

Evil then exists because god does not.  Or, as Epicurus stated, any "god" that does exist is not worthy of being called "god".

Do you "believe"? How would you define heaven?  How do you explain evil in the world?
Posted by sarniaskeptic at 1:05 PM 6 comments:

Earthquake happens because I wore my leopard print thong

You may have heard about an Iranian Cleric claiming that "promiscuous women cause earthquakes" - the idea that women dressing provocatively is causing earthquakes.  The scientific experiment failed when a number of women tried to cause an earthquake by dressing "provocatively".

However, today, I wore my leopard print thong to work and Sarnia feels the effects of an earthquake.  I know that the plural of anecdote isn't data - and I don't care if other men wore their thongs today - but, damn, that's some pretty compelling evidence (no it isn't).

Lesson learned!  Wearing this thong is going to be reserved for special times with my wife.  I promise I'll never cause another earthquake.
Posted by sarniaskeptic at 2:34 PM 4 comments:

I recently received an email from someone complaining about my blog regarding Lorriane Scott which has prompted me to write this entry.

The premise of this lady's email (and by "lady" I mean someone with a name that is commonly associated with a person of the female gender, refers to being married to a husband who should "kick the shit out of (me)" and chooses to use words that most ladies would not) was that I should be "shut-up" and "censored" and that my "opinions not facts" should be "banned from publishing".

But first, a little back story.  This lady had complained that I would "dare interfer(sic) with a charity event that was going to help cancer victims" (I suspect that people who have died as a result of cancer won't benefit much from cancer research so technically her claim is wrong).  In simply responding with a link to my "I was wrong, I am sorry" blog entry, she promptly responded with a "You should never have posted the first one to start with..." and "you should delete all your stories about psychics cause your (sic) wrong psychics exist".

It was clear to me that she had not even taken the time to read my entry about being wrong and sorry as I am not sorry and I don't feel that I was wrong in applying a skeptical eye to what the "Relay for Life" team was doing at their fundraiser.

I still believe that we should not simply toss all skepticism aside for things like this - the ends don't justify the means when the means can, themselves, cause substantial harm.  I took the time to write her a lengthy email stating that 1.) Censorship is wrong, 2.) I would defend her right to the death (her death, really) for her to say whatever she wanted, but, 3.) If she states something stupid, I'm going to laugh at her.

Adding to that, I suggested that the proposition that psychics exist, that people can predict the future and that faith healers exist is silly and (thanks Adam Sandler) they're all going to laugh at you.

Her reply?  "Your a stupid idiot never email me again."

Recently Tori Spelling admitted getting a reading from celebrity whackjob and claimed psychic John Edward.  During this "reading" Tori claims that Farrah Fawcett contacted her.  You can read the story online at canoe.ca.

Ironically (yes!), she hopes that people will not think that she is "loony" for doing so.

She says: "I haven't heard from Ryan (O'Neal), so I don't know... I'm hoping he understood what I was trying to say and doesn't think I'm some loony."

Okay, maybe not so ironic as there are countless people who actually believe in psychic abilities though no psychic powers have ever been shown through controlled experiments.

It saddens me that "celebrity" means "valuable" to many people when it comes to opinion or support.  Imagine listening to an actress give advice on not vaccinating your children (nobody would do that!).

For those who didn't already think of Tori as loony, she has given you good reason to change your opinion.

If you happen to believe in psychics, encourage your psychic to claim the $1,000,000 prize from the JREF.  Until then, we'll think you're loony.
Posted by sarniaskeptic at 11:25 AM 3 comments: 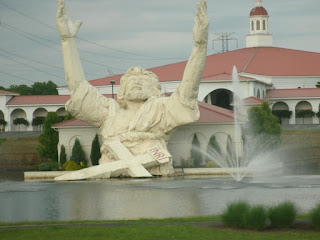 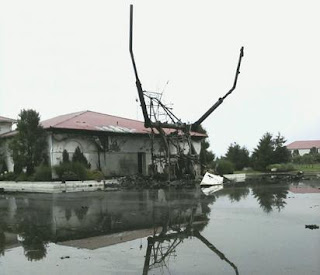 God definitely has a sense of humour - a trait that is usually reserved for things that actually exist.

Posted by sarniaskeptic at 12:35 PM 2 comments:

A couple readers have sent me emails about a "company" in town called "Withinsight".  I haven't had much of a chance to check out their site but with the constant emails, I thought I should take a look.

Listed on http://www.withinsighthealing.com/, you will find a variety of services offered (I've made them links to things you might find interesting):

For those who aren't going to bother to follow the links above, I thought I'd post what is found on withinsighthealing.com as it relates to "medical intuition".  Simply reading it should make some people laugh - it just really isn't funny because people believe this crap and actually forgo REAL medical attention because some quack has sold them on these crazy ideas.  The harm is real.

Medical Intuition is a way of stepping into a person's energy field and scanning for information about that person. And it's not as rare or as strange as it sounds. In fact, many people - parents in particular - do it without knowing. How many times have you met someone for the first time and gotten a 'bad' feeling about him or her? That's intuition. And how many times have you woken in the middle of night knowing your child was not well. That's intuition, too. People trained as "medical intuitives" do the same thing - except the scanning is very thorough and can be done 'on demand'.

Kathy Milliken was trained by Lisa Dennys of Inner Access 101 in Lori Wilson's Total Body Intuition in 2005. Kathy now uses her skills to track your body's energy to seek out causes of physical and emotional conditions or imbalances.

This can be especially helpful if you have been searching - without success - for the underlying source of a chronic condition. For instance, perhaps you occasionally experience tightness in your back. You realize this only happens at family dinners. Maybe it's general anxiety about preparing food for a large group of people or maybe it can be traced back to a time when your brother pushed you off a swing and you had the wind knocked out of you. Either scenario could be true and Kathy can help you identify the root.

Medical Intuition can also be helpful in tracing the origins of seemingly inexplicable phobias.

Scanning can be done in person or over the phone (at a distance). For more information about Medical Intuition, contact Kathy Milliken (M.A.) at (519) 344-xxxx.

It is clear that no matter how crazy an idea is, you can probably con someone into falling for it.  Thinking could, truly, save your life.
Posted by sarniaskeptic at 2:09 PM 7 comments: