Really Paul? That's the craziest part of the religion?

As, I'm sure, many of you have already heard, Paul Haggis has left the Church of Scientology after 35 years. 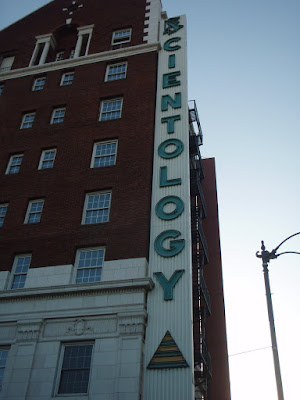 Paul Haggis was born in London, Ontario - about an hour from where I call home and is known for writing and directing films such as "Crash" and writing "Million Dollar Baby".
Having another member of the cult (Scientology is definitely a cult) leave is a good thing - having some of the darkest and deepest crazy ideas exposed is even better. Unfortunately, however, Paul sees "homophobia" as the craziest part.
Admittedly, being against Prop8 or against equal rights for all humans is nasty and despicable - something only the most bigoted organizations (churches/religions) could do. The idea, however, isn't so crazy - millions of people hold to that absurd religious dogma. It isn't the domain, simply, of Scientology.
The majority of Scientology (not the anti-gay position) makes the craziness of Mormonism seem believable. The story of Galactic Overlord Xenu, the use of Purification Rundowns and Introspection Rundowns and the claims about the E-Meter are purely unbelievable.
I know, I know, Scientology was also created by a Sci-Fi author (L.Ron Hubbard) but, seriously, the stories of every other religion are just made up too.
Posted by sarniaskeptic at 9:32 AM

My religion of the Flying Spaghetti Monster isn't made up! It is the one true religion! Prove me wrong...

Scientology is one screwed up cult. You are right that all religions are silly.

Jerry Coyne has some great stuff on Scientology and recent interviews, etc.