On Sunday of the AAI conference, the American Atheists organized a half-day Los Angeles bus trip that included stops at the Page Museum and in Santa Monica. Somewhere around 100 people took advantage of the offer. With so many atheists in just a couple of buses, you would have thought that 'God' would have had some fun with us. The joke, really, was on her/him/it.
If you're not familiar with Rancho La Brea (they're often called The La Brea Tar pits, which means "Tar Tar pits"), you should work to change that. From what I understand, there is no Spanish word for "asphalt" and that is why they're called "Tar pits" - even though it isn't tar. 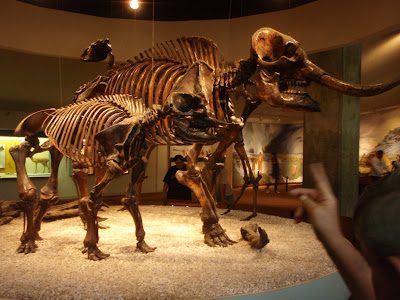 La Brea is home to some of the best preserved and most numerous fossils from a recent ice age. Inside the Page Museum, they have reconstructed a number of species using real fossils from those specific species - that, due to the true unlikelihood of fossilization and the usual destruction of animals prior to fossilization, is amazing. What is more amazing (to young earth creationists, anyway) is that the fossils range in age from twice the age of the earth to about 8 times as old as the earth. (11,000 years to 50,000 years old - they were between 5,000 and 44,000 years old before god even created the earth!)
If you're ever in the Los Angeles, California, area, make sure to include a trip the Page Museum - you'll be amazed at what is inside!
Posted by sarniaskeptic at 10:48 AM

We visited that museum earlier this year and really enjoyed it.

Our family trip next year will include the LA area and my kids are looking forward to seeing it.