It appears as though Robbie Thomas is working his magic and turning his friends into his enemies.  The old "Labyrinth Entertainment" site went missing recently (luckily, I am caching copies of the sites on a regular basis) and now forwards to the Robbie Thomas site (robbiethomas.net).   However, upon looking at the "cached" version of his site, I find a nice little gem. 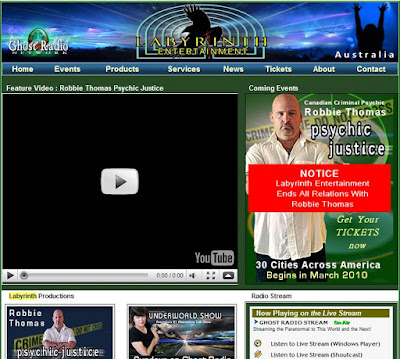 Over top of the "psychic justice" ad, it says:  NOTICE Labyrinth Entertainment Ends All Relations With Robbie Thomas.

If John Ramses (Labyrinth) wants to save face, he's going to have to do something a little different than he is now - at this point in time, Robbie's rumour mill is running in high gear.  I am rather surprised (and somewhat disappointed) that John Ramses hasn't come out with an official statement.

Since I predicted that Labyrinth was going to drop Robbie, I'm just packing my car up and heading down to Plantation, Florida to pick up my million dollar prize for my psychic abilities. (What's that you're saying? You think anyone could have figured out that eventually John was going to realize what a scumbag Robbie Thomas is?  That's not psychic abilities?  But, but, it, ummm, is better than what Robbie has ever predicted.  Nevermind, back to my regular job.)

(Someone has suggested that maybe John Ramses had a change of heart and is just forwarding his website to the Robbie Thomas site - John?  Are you there?  John Ramses?  Are you the a$$hole that Robbie claims you are and you've come to your senses on such??  John - the ball is in your court - distance yourself for the slimeball, or go down with him.)
Posted by sarniaskeptic at 11:05 AM