I received an email from a Robbie Thomas supporter earlier today telling me that the information on this site is inaccurate.

As I have seen Robbie reference the 20 years as well, I will see about getting the counter updated on my site.  0 solved cases in 20 years, however, doesn't make Robbie look better than 0 solved cases in 18 years.

To reiterate, Robbie Thomas (self-proclaimed psychic in Sarnia) has solved 0 murder or missing persons cases using claimed psychic powers.  For him to claim otherwise, one would have to assume he is either mentally ill or lying.

Robbie's New Event
If you haven't heard, Robbie is doing another event (he changes the name of the event every year), "canamaparafest" - and this time we're not going to miss it :)

In case you haven't checked out Robbie's new website (new again!), he has the new 'fest' advertised: (The stupid, it burns.) 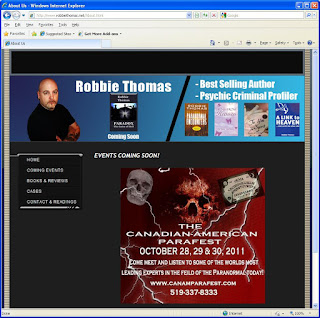 In case you can't read the ad, here it is: 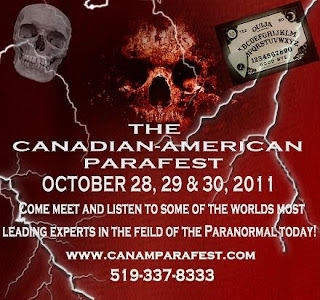 Robbie's Book & Book Reviews
I've mentioned Robbie's book reviews on this site before but I thought I should update you.  I've received emails from 2 people who posted a review of his book (one of the people ACTUALLY has it and is going to send it to me - the other person has read it but I promised I wouldn't explain anything more than that).  Their reviews were removed from the Borders site because someone complained.

There are 6 reviews that remain on the Borders website - all positive, all 5 stars and all written with the same level of (il)literacy of Robbie Thomas (I'm not saying he wrote them all - just that the people who supposedly like his books have a limited grasp of the English language).  Each of the 6 reviews are the ONLY reviews each reviewer has written and they are written on the same day they created an account on Borders.com.

You, too, can go to http://www.borders.com/ (Go straight to Robbie's crappy attempt at being an author), create an account today, log in, claim to be anyone you want from anywhere you want and post a review.  Yes, it is that simple - you don't have to buy the book you're reviewing, even. I'm not suggesting that you stoop to the level that Robbie Thomas (who is not psychic) would go (ie. create a fake review) but if you want to log on to Borders to post a review that suggests that all the reviews are fake or if you want to report the current reviews as apparent fakes - that's up to you :)
Posted by sarniaskeptic at 4:07 PM

The review from Frank Depersa is still there.

Does anyone know what happened at this years event? Last I heard he was running low on guest speakers :)

The event's web site was down even before the event. I think things didn't go as planned, ticket sales low and guest speakers didn't show...

Robbie is a joke.

I wonder if he paid the web designer from Toronto. I bet he didn't and that is why he has a new and improved, mispelled and wacky web site he did himself.

Not a single person attended the convention. You should call Quality Inn cause rooms may have been cancelled for the show.
Know anyone at the Lawrence House? Did they do the tour the night before? I dont think so.