Having fun at the Walmart Pharmacy - Homeopathy awareness

My wife and I ran in to Walmart to get a few things earlier today and, while we were there, my wife asked if I needed anything (she probably regrets that now). I told her I had to go to the pharmacy - the cold medicine aisle. It was full of people but I was able to squeeze in to see the nonsense on the top shelf (homeopathic flu treatment). I grabbed a few of them (I had to reach above a couple that was squatted down looking at other medicines) and it got the attention of a few people around me. The couple that was squatted down asked if what I grabbed was 'good stuff'. I told them, no, that it was pure stupid. It is homeopathy and there is nothing in it. Completely stupid.

When she responded with the word "holistic", I knew I was dealing with an ill-informed person. Her comment was "I think that holistic medicines combining alternative medicine with western medicine..." and I interrupted her and said "what do you call alternative medicine that works? Medicine." while I put the crap back on the shelf and said "at least it is on the top shelf where most people won't be able to reach it". I left the aisle and my wife and I went to check out.

My wife suggested that I make life interesting but I'm not sure she meant it as a compliment.

PS.  If you think it is stupid that Walmart carries a few Homeopathic "medicines", consider Hogan Pharmacy - they have a Homeopath on staff!  (A few points about the picture below - it was scanned out of "Business Trends" "magazine", contains a bunch of stupid - anyone who mentions "allopathic" or "allopathy" deserves to be heckled and because something is "old" doesn't make it right.  If we're going to mention "the turn of the century" (forgetting that we've actually "turned" another century in case Lynn hadn't noticed - she's referring to the 19th - 20th century not the 20th - 21st), we should also mention that life expectancy was decades shorter than it is today.  Homeopathy may have appeared less stupid then but we've grown up and we KNOW that it is stupid today.) (Click the image for a larger version.) 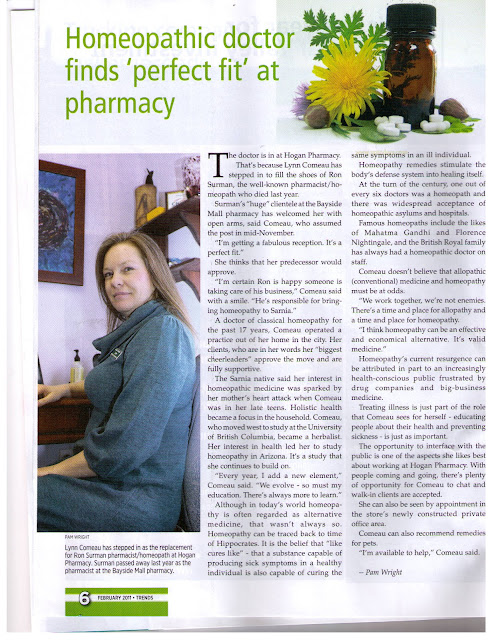 Posted by sarniaskeptic at 9:47 AM

My wife would kill me if I did that. Good for you!

Homeopathic medicines must be chosen based on the totality of the patient's symptoms and constitution in order to produce an effect. Taking a remedy which is not correct will have no effect at all either positive or negative. It requires at least minimal training to choose the correct remedy to treat an acute illness. It requires a consultation with a homeopath to treat chronic illness.

What this stunt shows is that homeopathy is safe, something which has already been proven in studies.

Children seeing this stunt could try to imitate it. Not knowing the difference between homeopathy and conventional drugs, a child could overdose on aspirin or a prescription drug and be harmed.

There are 100's of studies published in 78 respected, peer-reviewed medical journals showing homeopathy works. For some of them see the website of the National Center for Homeopathy, look under "articles" and then "research".

Christine:
You didn't follow a single link that I included in either of my homeopathy posts - 175 years and not a single properly designed trial has shown Homeopathy to be anything more than placebo (which is nothing, itself, when it comes to altering the natural history of a disease).

To accept your claim that taking a remedy which is not correct will have no effect but that it works for someone who it is properly selected for, one would also have to accept that almost everything we know about biology and human physiology is bullshit. Occam's Razor would have us suggesting that Homeopathy is the bullshit (it is).

Christine - point me to your favourite studies that support homeopathy. I bet you haven't read them yourself - you've probably heard that there are studies, saw a long list on a website and assumed that they were great studeis, perfectly controlled for and showed positive effects (beyond placebo). The list is comprised of crappy studies with almost all of them showing no effect beyond placebo (or placebo wasn't controlled for), substantial potential for bias and not a single study that supports Homeopathy (beyond placebo) has ever been replicated. (And never will be.)

Homeopathy has never cured anything and has no potential to cure anything.

If you are suggesting that we stop making Homeopathy look silly by doing "overdose" attempts because a kid might be confused, you are putting the blame in the wrong place. YOU are the one suggesting that it is medicine (it isn't) and you are the ones confusing the public. Shame on you.

I went to the site you recommended Christine. The National Center for Homeopathy lists a bunch of 'studies'. Of the first nine, 6 were in sympathetic journals. Most didn't suggest large numbers and didn't state controls. Links to the articles were not given unless you had to pay for the article ($31.50 each).

The Cuba study is one of them and it is talked about here. The blog author has already referred to it.

The 'title' for the 9th article is "Placebo effects in homeopathy not larger than in conventional medicine". That doesn't support the use of Homeopathy.

I think that skeptic is correct when suggesting that you havent read the articles.

Lynn Comeau has her own web site where she ran her own "practice". I guess she couldn't make enough money on her own so she is making her presence more visible in a pharmacy where people come in for real medicine and may be scammed into buying her placebos.

Unsuspecting customers should have some warning of Bullshit inside there.

Her linkedin page is:

Both are full of Bullshit! Crackerjack credentials!

Her picture on her website looks nothing like her in the article. The local paper says she charges $90 for a two hour consultation and her website says $150. What to believe?
I think I'll have to believe that it is a waste of money either way.

Anonymous makes a good point - Christine, if you have read these studies then could you send me a copy of them? (I'm thinking that you have never purchased them or read them so this is pointless.)

I was able to get access to some of the articles (shhh) and a couple of them don't state what you claim. One of them shows Homeopathy to be nothing more than placebo and another one states that it could not identify a single ailment that they would recommend Homeopathy for.

Homeopathy is implausible, has no good supporting evidence and to this day has never been proven to work. There's nothing in it.

In case you are as good at searching my site as you are at reading studies/research papers, my email address is:

I'll be waiting for your email. (Who am I kidding? Christine is another Homeopathy apologist who just does hit-and-run blog comments, I bet.)

""I'm certain Ron is happy someone is taking care of his business" Comeau said with a smile" was stated in the article. Obviously an admission that she thinks Ron is happy while he is dead or she is delusional and thinks he is happy in the "afterlife". The later makes sense because she is also delusional to think homeopathy works, it doesn't. There is nothing in the water!

Me too! Don't tell my wife.

I was not familiar with an organized effort to expose homeopathy. In 14 years working at a pharmacy selling homeopathic crap I don't think I ever let anyone buy that. If people were looking at it I would approach them, ask what the symptoms were and then strongly recommend something else. Like your experience I think that many users of homeopathy think that it is herbal medicine.
I can recall a few instances when we had to take homeopathy products off the shelf that contained things it shouldn't have. That would be my worry in an overdose attempt.

Yes, that would be my fear too if the homeopathic potion wasn't really what it was claimed to be in the overdose demonstration. Boy, can you imagine the dishonesty there - LOL.

But she has nice tits!

As someone who is planning on going into the practice of pharmacy ( going through pharmacy tech for 2 years, then going up to, more than likely waterloo for full pharmacist. ) that is my biggest worry.

Having to sell a product i don't agree with ( I am assuming i will be working in a store or two, though my goal, eventually is to become a member of ocp. ) is something that does not sit right with me at all. Even looking for a summer job vacuuming or tending a cash register in a pharmacy, i am kind of wary of where i get offers from.

Stupid price of morals. I am a low budget actor who knows about medicine, i should be B.S.'ing and selling homeopathy instead of hating it, lol.

Does homeopathy make the tits grow bigger in females? Then I'll be all for it.

You know, i think the ' tits' comments ( i hate that word btw.) are designed under the " if you don't have anything nice to say, don't say anything at all principal.

Not pertinent to the discussion, but i am sure the comments are nicer than some commentary regarding homeopathy that could be made.