I could have written this post a long time ago - it really doesn't matter. We know the abilities of psychics and, without a doubt, they would have used them when planning their "Paranormal Conference 2009" that was recently held at the Holiday Inn in Point Edward, Ontario.
The event lasted two full days - August 6th and 7th. With the event beginning at 8:30 AM on Thursday, I figured I'd drop in early afternoon and, boy, was I surprised.
With the ability to predict/see the amazing things that psychics claim they can, I was left asking myself one question.
Why did they set up so many (hundreds?) chairs for so few (less than 10?) attendees?
In all fairness, I didn't stop by on the Friday so it could have been really really busy. I'm skeptical, however, since they quickly took down their website. 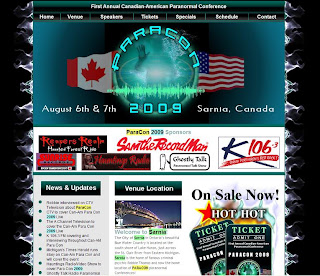 Could this possibly be Robbie Thomas' first psychic failure? (Answer: No.)

(A little "aside": Robbie was talking to an attendee about what he was going to be presenting on - how he was involved in 14 homicide investigations. Unless Robbie was being investigated for the homicides, I suspect the police didn't willingly have Robbie involved! I would also venture to say that for him to call it "help" as it referred to what he did, he had to redefine the word "help". "Hindered", not "helped" was the word he needed in the sentence "I (hindered) 14 homicide investigations.")
Posted by sarniaskeptic at 2:31 PM

Bastard! We should have gone as a group of people. Would have been cool to outnumber the believing folk.

Why didn't you call me too if you were going! I could have worn my atheist bus T shirt or my black T shirt with the Out Campaign Scarlett A. I thought it was a waste of money to go.

Did you go to the creation "museum" too with PZ's group?

Speaking of museums. Has anyone been to the Stones N Bones museum in Sarnia? I was pleasantly surprised by the amount of exhibits in there. Very impressive!

Corunnaskeptic:
Stones N Bones is definitely one of Sarnia's best kept secrets. It is unfortunate that most people aren't as interested in things like that.

I've been there a number of times and I have to admit it has more than you'd ever expect. Thanks for the reminder - I'm going to have to go again!

RAmen:
I didn't get to go to the creation "museum" with PZ but I sure hope to go some day.
On a different (but similar note because PZ will be there), I am going somewhere pretty exciting - I'll have to write a posting about it.