Robbie Thomas Admits To Not Being Psychic

Good news and bad news. The bad news is that Sarnia (technically Point Edward) will be subjected to inane woo-woo again in 2010 in the form of "Canadian American Paranormal Convention 2010". The good news, Robbie Thomas admits that he's not psychic!

Mind you, if I was going to choose a method to come clean, it wouldn't be by pretending to still have "psychic" powers, hoping to sell tickets based on that and then covertly admitting that I don't have such "psychic" powers. 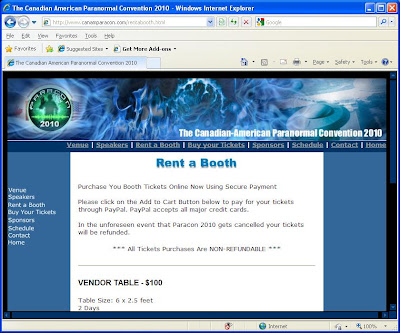 At: http://www.canamparacon.com/rentabooth.html it clearly states (sorry for the blurry image):
In the unforeseen event that Paracon 2010 gets cancelled your tickets will be refunded.

There you have it, folks, Robbie Thomas is not psychic! (Why can't he predict if it will be cancelled and, I wonder if he's predicting another failure like last year?)
Posted by sarniaskeptic at 11:53 AM

i found your site when searching for robbie thomas. he claism to be helping with lots of cases but i cant find any that he helped in can you point me to some that he solved or is he really a fake psychic?

ALL psychics are fake. Not too long ago, his site, http://www.robbiethomas.net was filled with news clippings,anecdotes etc., but I have recently noticed he has taken all that stuff out (except he has added more anecdotes).Try typing in his address at the "Wayback Machine",http://www.archive.org. Hope that helps.

your twitter said robbie doubled his number of solved cases but it still is 0?

The reality is that Robbie Thomas is not psychic so his "solved" cases due to psychic abilities will, forever, remain at 0 (zero).

This guy looks like a major douchebag too. He needs to be exposed as the fraud he is.

Haha!! Just read the Sarnia This Week article. What a lying piece of s**t. So his critics have been silenced and the blogs shut down. What an idiot!! And would Sarniaskeptic know who Thomas has invited to his show? I
If these are advertorials, shouldn't they be labelled as such? And if they are not, are these reporters idiots?

Sherwoodskeptic - do you have a link to the Sarnia This Week article? I couldn't find anything on-line.

I've had a few conversations, now, with people that Robbie has claimed to have helped - and it's not looking good for Robbie. He had to predict we'd catch him in a whole bunch of lies :)

I wonder if Robbie still lives at 834 Pineview Ave in Sarnia. We might want to gather a few people (media) and pay him a visit - the information boggles the mind. I think the information is too much for my little blog - Robbie deserves all the attention he's striving for (though it won't be the kind he wants).

Sarniaskeptic - It's in your email.

He won't be there because he would know the gang is coming.

There is also a woowoo reader fortune teller on East Street just south of Exmouth on the west side.