Fortunately for those who follow religions, their teachings and views are clear, concise and consistent. They are lucky to have such a moral guide that us atheists do not have. The absolute truths provided by their faith with unquestioned support from their bible are something non-believers (like me) long for.

The bible and all followers of it are clear about what their stance is on everything in this world, for example:
Now that we're clear that the bible is free of ambiguity and contradictions, I'll explain why it is that I will be damned for eternity.

I was a member of the Catholic Answers forum (I still receive the SPAM, even) and engaged in deep discussions with people there - for example, "Is Jonah and the Whale a fictitious story?" (apparently that's the one thing that people are undecided on), "Should I fix having been "fixed"?" (Oops, maybe there are two things) and, most importantly, "Is it okay for dads to be the stay at home parent?" (Damn, three for three.)

I had to start the last paragraph with "I was" because, you see, my weekly invites from the Catholic Answers forums aren't really invites. When I attempt to return, St. Peter tells me that I'm damned for eternity. 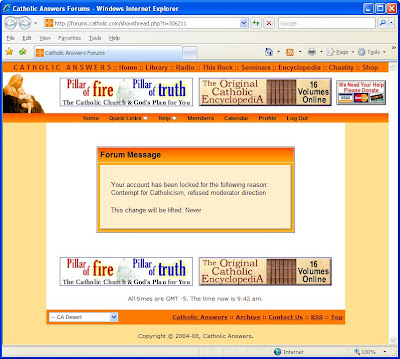 (In case you can't read the text, it says "Your account has been locked for the following reason: Contempt for Catholicisim, refused moderator direction
This change will be lifted: Never")

As I plead "guilty" to the charges, a statement of agreed facts was read to the courts including my original post that was contemptuous.

First was the question that I responded to:

Is it Criminal to Rely on Faith, not Medical Help?
“WESTON, Wis. — Kara
Neumann, 11, had grown so weak that she could not walk or speak. Her parents, who believe that God alone has the ability to heal the sick, prayed for her recovery but did not take her to a doctor.After an aunt from California called the sheriff’s department here, frantically pleading that the sick child be rescued, an ambulance arrived at the Neumann’s rural home on the outskirts of Wausau and rushed Kara to the hospital. She was pronounced dead on arrival. The county coroner ruled that she had died from diabetic ketoacidosis resulting from undiagnosed and untreated juvenile diabetes. The condition occurs when the body fails to produce insulin, which leads to severe dehydration and impairment of muscle, lung and heart function.“http://www.nytimes.com/2009/01/21/us/21faith.html

No, allowing the child to die a tortuous death isn't criminal but harvesting stem cells from an embryo that has no feelings and senses no pain should be.

I think that's the right position to take as a good Catholic.

And that, my friend, is contempt for Catholicism. I can't think of anything better to encourage others to do more often and with more vigor.
Posted by sarniaskeptic at 9:44 AM

Ah, now we see it. "Contempt for Catholocism" = holding up a mirror they would prefer not to look into.

And the grammatically correct version of that would be, "holding up a mirror into which they would prefer not to look."

Man, I'm such a pedant, I correct myself.